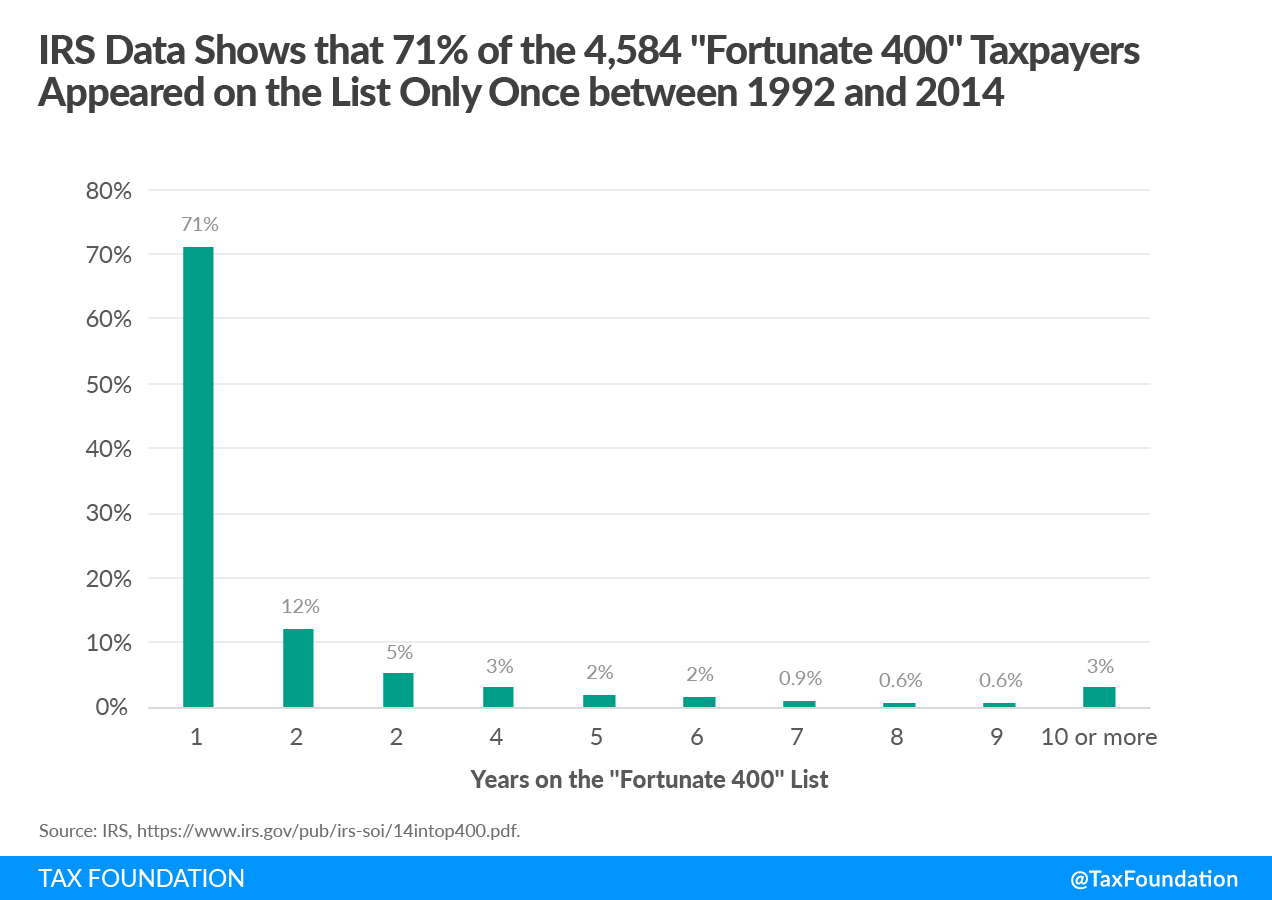 Congressional Democrats are reported to be weighing a special tax on the assets of billionaires to raise revenues to pay for their Build Back Better spending plan. There are two fundamental challenges to such a plan. First, the incomes and wealth of such individuals are anything but stable; they rise and fall with the economy and other market conditions, so taxes tied to them will be volatile. Second, the rich are not monolithic. People move into and out of millionaire status, even billionaire status, all the time. Thus, taxing the rich is like taxing a river—rarely the same people year after year, which adds to the volatile nature of the taxes tied to them.

IRS data illustrates this point. For many years the IRS issued reports on the income and taxes paid by the top 400 taxpayers, dubbed by some as the “Fortunate 400” report. Over the course of 23 years, 1992 to 2014, some 4,585 unique taxpayers earned enough income to be on this lofty list. In 2014, the income cutoff to be in this group was about $126.8 million in adjusted gross income (AGI). The average AGI in the group was $317.8 million.

Yet, as Figure 1 shows, over the course of two decades, 71 percent of these individuals earned enough to qualify for the list only once. Just 12 percent (comprising 558 people) earned enough to make the list twice over that period. Only 3 percent made it onto the list more than 10 times over that two-decade span. This elite group represented 138 individual taxpayers, barely enough to fill a large conference room and hardly enough to build a major new spending plan around.

Why Such Churn among the Fortunate 400?

The IRS data shows that the incomes of the richest Americans tend to be very volatile because they are drawn from income sources that can fluctuate considerably, such as capital income and business income. Thus, when people qualified for the Fortunate 400 list it was often episodic, likely the result of selling stock or a privately owned business, not the result of a regular flow of income.

The chart shows clearly that the most volatile income sources are capital income (sale of capital assets) and business income (from partnerships and S corporations). In 1992, capital gains income comprised 36 percent of the overall income for the top 400 taxpayers. By 1999, however, capital gains income comprised nearly 73 percent of the top 400’s overall income. Certainly, one reason for this is the 1997 tax bill’s reduction in the capital gains tax rate from 28 percent to 20 percent. Another is the dot.com bubble of the late 1990s. 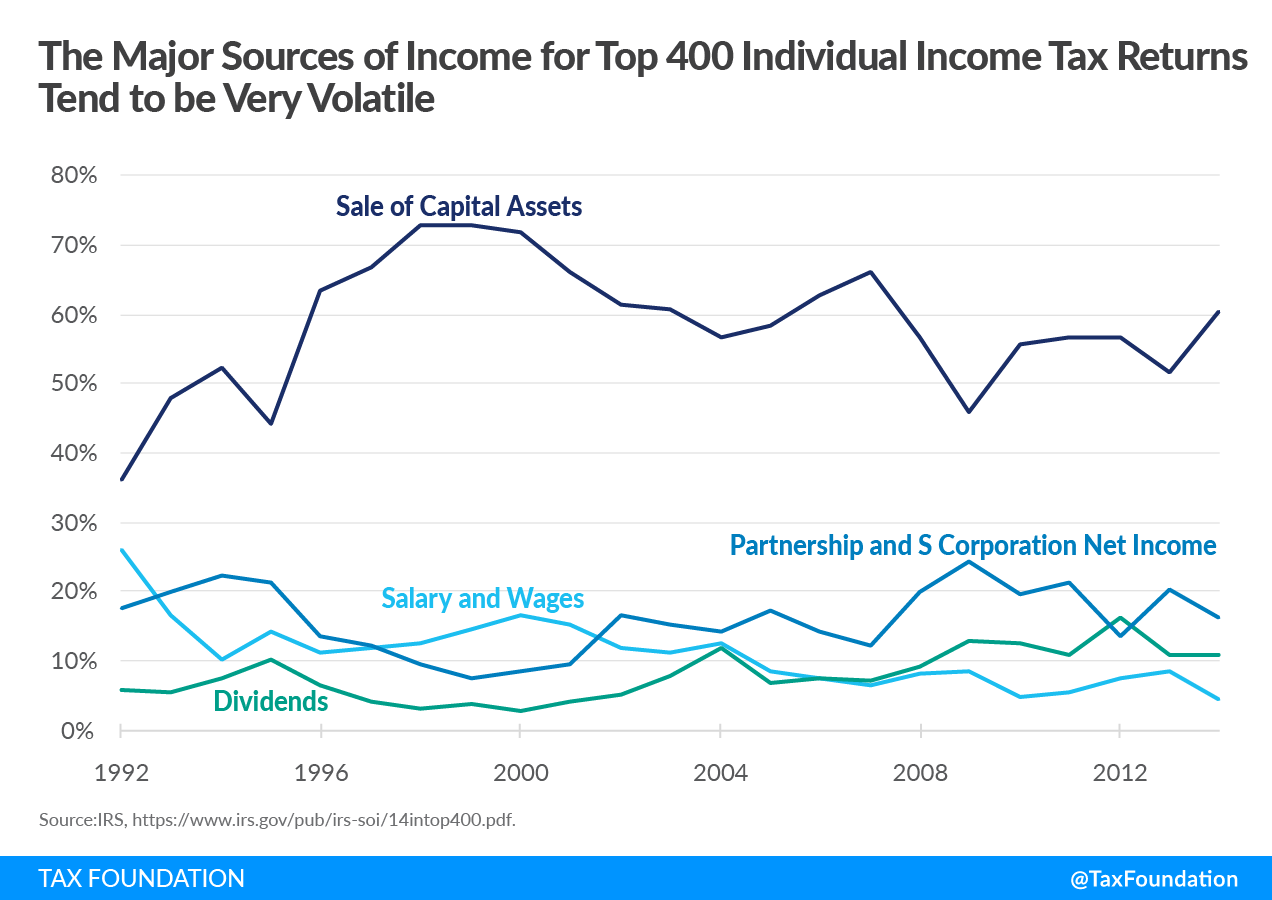 Capital Gains Income Is the Most Volatile Income

In the years following 2000, capital gains income for the rich was very volatile, reaching a high of 66 percent of total income in 2007, falling to a low of about 45 percent in 2009, and then rising again to 60 percent in 2014. In real dollar terms, the IRS data shows that capital gains income for these taxpayers fell 51 percent from 2000 to 2002, then doubled between 2002 to 2007, but fell again by 26 percent by 2014. It’s easy to see that if a wealth tax or mark-to-market tax were in place during this period, it would cause a similar pattern of boom and bust in federal tax collections.

Even the Wealth of the Rich Can Fluctuate Wildly

Because much of the wealth of rich Americans tends to be dependent upon capital gains or business income, the value of it also tends to fluctuate based on market and economic conditions. Here again, IRS data can give us a picture of the rise and fall of the net worth of wealthy taxpayers.

From 1989 to 2016, the IRS periodically estimated the net wealth of taxpayers based on their composition of income and other factors. Although the most recent data is a few years old, it still illustrates the up and down nature of the net wealth of rich Americans. Figure 3 compares the total net wealth of individuals with more than $20 million in four snapshot years, 2004, 2007, 2013, and 2016. These figures have not been adjusted for inflation, but that would not likely change the story.

In 2004, the IRS estimated that wealthy individuals had nearly $2.6 trillion in net wealth from all sources. By 2007, their net wealth had increased to nearly $4 trillion. Much of this appreciation was due to a substantial increase in the value of their closely held stock, their holdings of publicly traded stock, and their holdings in noncorporate business assets. 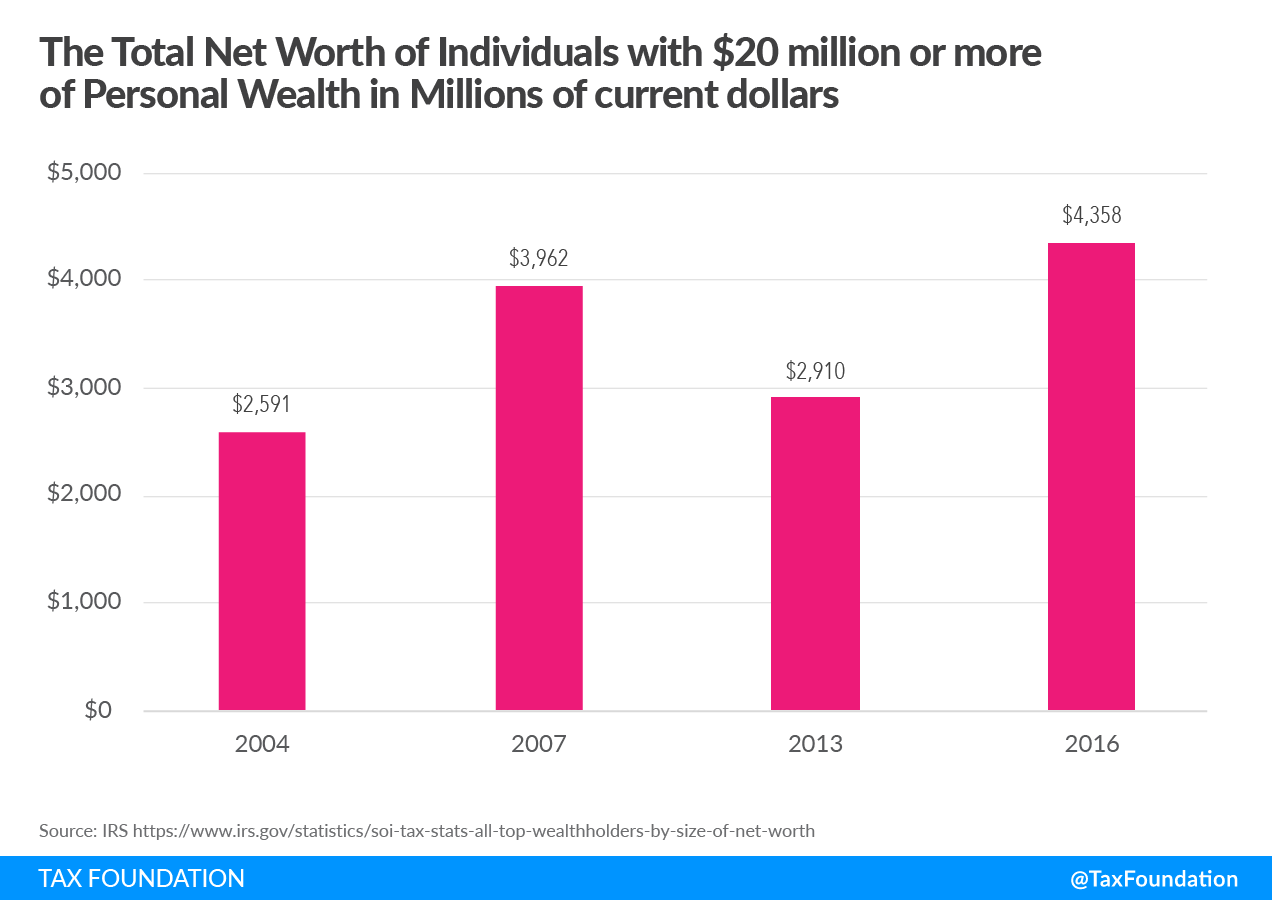 By 2013, the net wealth of these individuals had fallen by a collective $1 trillion in nominal terms, or 27 percent. More than half of this decline in net wealth was due to a major reduction in the value of their holdings in closely held and publicly traded stock, real estate, personal residences, and even the reduced value of their art.

By 2016, the bust had turned into a boom for these individuals. Their net wealth increased by more than $1.4 trillion collectively, largely driven by a rise in all of the asset classes that had fallen in value during the preceding period—stocks, real estate, and business assets. One of the few asset classes that did fall in value was their art.

This 12-year snapshot of the rise and fall of the net wealth of rich Americans should make clear the dangers of linking the funding of new federal spending programs to a wealth tax or other asset-based tax.

Real life examples of the rise and fall of the rich’s assets happen every year. Just recently, Mark Zuckerberg’s worth dropped by $7 billion in one day after Facebook shares dropped 5 percent following the revelations from a whistleblower. Similarly, Jeff Bezo’s net worth fell by $13.5 billion in one day after Amazon posted earnings that were less than what analysts expected. The question for lawmakers is, should funding for federal programs be tied to such unexpected events?

Taxing the rich is taxing a moving target. IRS data shows that there is no such thing as “the rich,” or even “millionaires and billionaires.” These are not monolithic groups. Such terms are an attempt to homogenize an ever-changing group of people whose incomes and wealth rise and fall with the economy, the vagaries of the stock market, and even tastes in art.

The vast majority of people who earn enough to qualify for lists such as the Fortunate 400 do so because of a one-time transaction such as the sale of stock or a privately owned business—the timing of which is frequently at the seller’s discretion. Very few people are wealthy for long periods of time. Thus, linking a massive expansion of federal programs to an untested new tax on such a narrow group of taxpayers is inviting instability to federal tax collections.

Of course, the biggest danger of either the wealth tax or taxing capital gains on an annual basis is that a tax aimed at billionaires today will eventually be levied on average taxpayers. We are witnessing a replay of 1969 when the Alternative Minimum Tax was enacted following reports that 155 rich people paid no income taxes in 1967. Decades later, a tax that was aimed at a few hundred taxpayers impacted millions of suburban households in states from New York to California. History is repeating itself and the future is not good.

You may get a 1099-K for Venmo and PayPal payments. Here’s how to prepare — and shrink your tax bill
This Stock Is Approved By The Oracle
‘There is a slowdown happening’ – Wells Fargo, BofA CEOs point to cooling consumer amid Fed hikes
Musk’s Twitter reportedly hasn’t paid rent on its office spaces for weeks
FTX spent $256 million on Bahamas real estate — now the island’s government wants it back