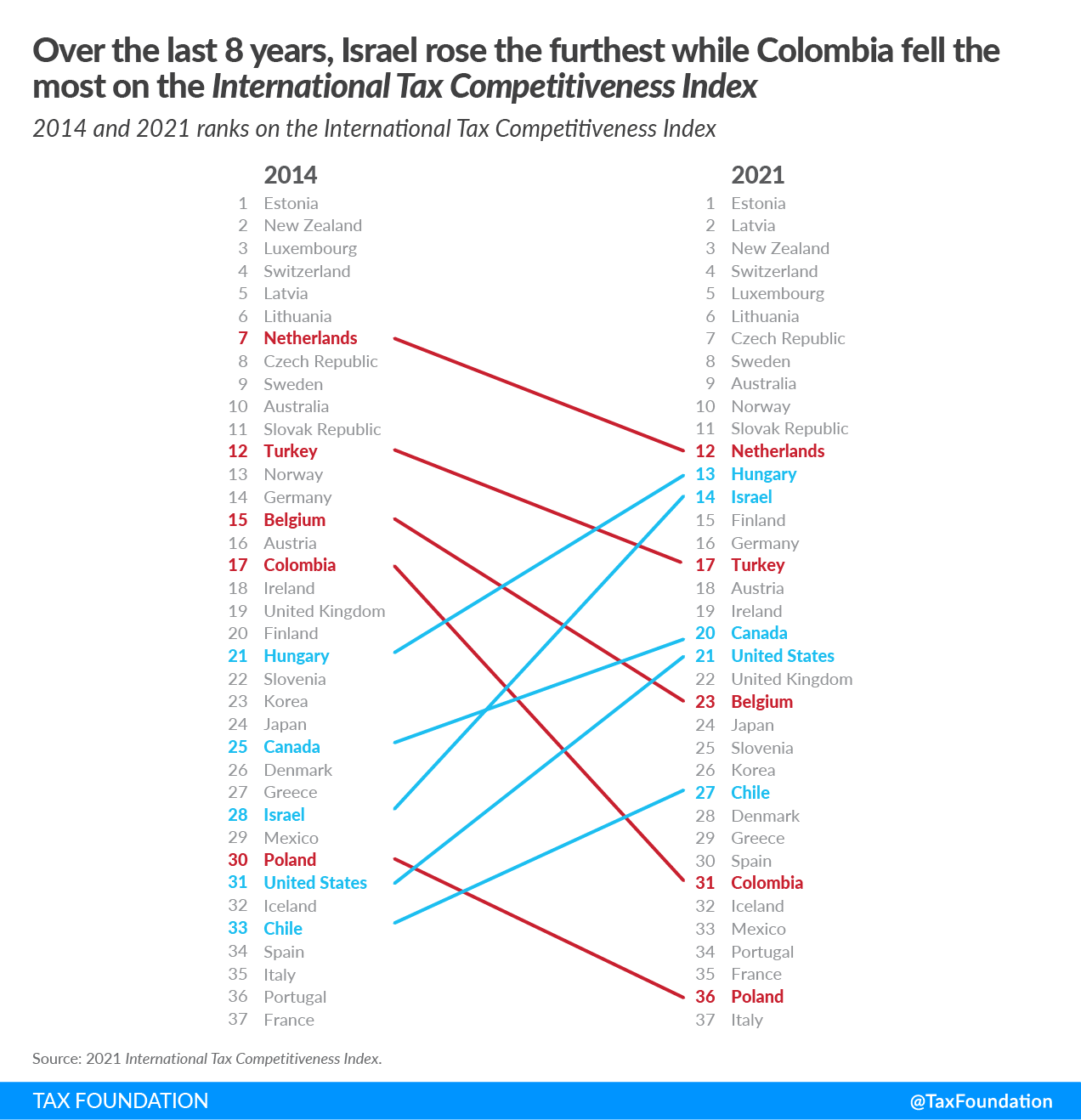 The 2021 version of the International Tax Competitiveness Index is the eighth edition of that report. Over the years, many different researchers at the Tax Foundation have worked on the report, several new members of the Organisation for Economic Co-operation and Development (OECD) have been added, and various methodological changes have taken place.

One thing that has remained consistent is our work to ensure that the latest methods are applied to all years so that one can compare the Index data over time in an apples-to-apples manner.

This allows us to look back and see how country ranks have changed over time and be able to identify the largest movers and shakers over the last eight years.

The five countries that saw the largest improvements in their rank over that time period are:

The five countries that fell the furthest in the rankings between 2014 and 2021 are:

Each of these countries has a different tax policy story over the last eight years.

Israel’s rank has benefited from tax simplification that has reduced the number of required tax payments. One of its strengths is having a relatively low value-added tax (VAT) rate which applies to a broad base.

The United States adopted a broad tax reform package in 2017. The U.S. also provides full expensing for investments in machinery, something that not only boosts its rank on the Index but also helps to spur new capital investment which are critical for long-term growth.

Hungary brought in changes that included reducing its corporate tax rate to 9 percent (the lowest in the OECD) in the context of a flat tax on personal income and a 27 percent VAT rate (the highest in the OECD). However, a weakness of the Hungarian system includes special taxes on estates, real estate transfers, and bank assets.

Chile currently has several temporary policies in place that, once they expire, might return its rank to the low 30s.  One of those temporary policies, which should be made permanent, is full expensing for investments in new buildings, machinery, or intangible assets.

Canada followed the U.S. by adopting full expensing for some short-lived assets, and its rank on the Index also benefits from the lack of wealth, estate, or inheritance taxes.

For the countries that have seen lower ranks, there is also a diversity of why these changes have taken place.

As the Netherlands has brought in new cross-border tax rules it has begun to look more like those in other countries, placing it closer to the middle of the pack. A weakness of the Dutch system is that the VAT applies to a relatively narrow tax base.

Turkey has implemented an increase in its statutory corporate tax (going from 20 percent in 2014 to 25 percent in 2021). However, Turkey is one of the few countries that has an allowance for corporate equity, which helps to minimize the bias toward borrowing that is common in corporate tax codes.

Poland suffers from standing mostly still on major tax policy changes while other countries have made policy changes that move them ahead. Poland also has multiple distortionary property taxes with separate levies on real estate transfers, estates, bank assets, and financial transactions.

Colombia has fallen behind as it has increased its VAT rate from 16 percent to 19 percent while its VAT base has become one of the narrowest in the OECD. Additionally, at 31 percent, Colombia’s corporate income tax rate is significantly above the OECD average (22.9 percent).

The Index provides lessons for policymakers when they are thinking of ways to remove distortions from their tax systems and remain competitive against their peers. The further up a country moves on the Index, the more likely it is to have broader tax bases, relatively lower rates, and policies that are less distortionary to individual or business decisions. Going the other way reveals a policy preference for narrow tax bases, special tax policy tools, and rules that make it difficult for compliance.