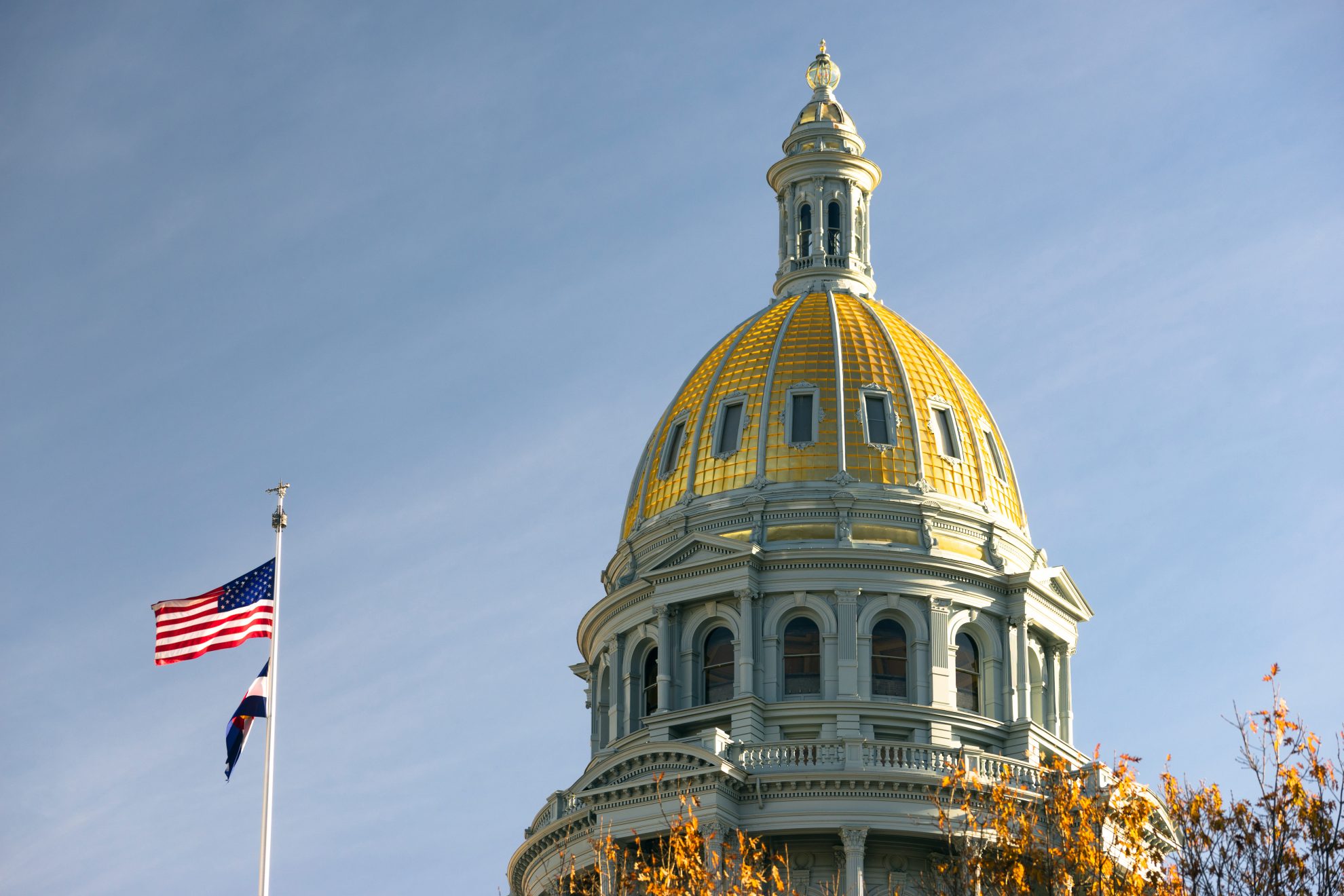 On November 2, in addition to electing various city council and school board members, Colorado voters will decide two important questions of state tax policy. Proposition 120 would reduce property tax assessment rates for two subclasses of property and require the state to spend up to $25 million a year, for up to five years, in Taxpayer’s Bill of Rights (TABOR) refunds to reimburse localities for homestead exemptions. Proposition 119 would increase cannabis taxes by five percentage points to partially fund a proposed out-of-school learning program.

Both measures were citizen-initiated and would require a simple majority vote to become law. If approved, they would make the tax code less neutral and less structurally sound.

Prop. 120 initially set out to reduce property tax assessment rates for all residential property and most nonresidential property. However, immediately after the measure qualified for the ballot, state lawmakers enacted a workaround law that changed the underlying statute in a way that alters the effect of Prop. 120 if adopted.

Specifically, Prop. 120 as originally intended would have permanently reduced the property tax assessment rates—the percentage of property value subject to tax, not the rate on that value of property—from 7.15 to 6.5 percent for all residential property and from 29 to 26.4 percent for all nonresidential property except that used for mining or oil or gas extraction. These rate cuts would have reduced local property tax revenue by an estimated $1.03 billion annually, a more than 6 percent reduction in local tax collections.

However, Senate Bill 21-293, enacted in June 2021, created several new subclasses of property so that Prop. 120’s permanent rate reductions would be limited to classes that now only include multifamily housing and lodging properties. Given that bill, if Prop. 120 is adopted, the assessment rate for multifamily housing properties (including apartments, duplexes, and triplexes but not condominiums) will permanently be reduced from 7.15 to 6.5 percent, and the rate for lodging properties (including hotels, motels, and bed and breakfasts) will permanently be reduced from 29 to 26.4 percent, effective January 1, 2022.

But Prop. 120’s originally-intended assessment rate reductions for other types of properties—like single-family homes and commercial, industrial, and agricultural properties—will not take effect. As a result, Prop. 120’s revenue impact is expected to be only about 5 percent of the amount its backers originally intended, assuming courts permit the legislature’s attempts to work around the pending ballot measure. Since only a small subset of properties would experience tax cuts, only about $45.9 million in local property tax relief would be provided.

In addition to creating a workaround to negate much of the impact of Prop. 120, SB 293 did enact a tax cut of its own along much the same lines, but only for two years. Specifically, under SB 293, single-family residential properties will see a lower 6.95 percent assessment rate for two years and agricultural and renewable energy production properties will go to 26.4 percent. Absent the enactment of Prop. 120, however, multifamily properties will go to 6.8 rather than 6.5 percent, and all of these changes will be temporary rather than permanent reductions.

To better understand the motivations behind both Prop. 120 and SB 293, it is helpful to understand the unique history of property tax assessment rates in Colorado. The reductions proposed in Prop. 120 and enacted in SB 293 come just one year after voters approved Amendment B, to strip the so-called “Gallagher Amendment” from the state constitution. From 1982 until its repeal in 2020, the Gallagher Amendment required that residential real property comprise 45 percent of the statewide property tax base and nonresidential property comprise the other 55 percent.

Repealing the Gallagher Amendment was a good policy decision for the state and was long overdue, and it is undermined by making further downward adjustments to residential property assessment rates while substantial non-neutrality remains. While the Gallagher Amendment is no longer widening the gap between how residential and nonresidential properties are taxed, the current discrepancy in assessment rates is highly non-neutral and burdensome to businesses, impeding the state’s competitiveness as a destination for business investment. Instead of continuing to pick winners and losers in terms of who gets tax cuts and who doesn’t, Coloradans should prioritize reversing the non-neutralities that exist in the state’s property tax system, working instead to create a neutral system that distributes the property tax burden more evenly.

Colorado already has the fifth-lowest effective property tax rate on owner-occupied housing in the country (0.52 percent), leaving Colorado businesses to face a disproportionate share of the burden.

Under an ideal tax system, all property is taxed in a uniform manner to avoid picking winners and losers and incentivizing some forms of ownership over others. Colorado is one of 18 states with what is called split roll, where different classes of property are taxed at different rates or have different proportions of their market value subject to tax. Of these, Colorado has the highest degree of variance between how commercial and residential properties are treated. Even the enactment of SB 293 will, unfortunately, further exacerbate this split, albeit temporarily.

Proponents of Prop. 120 have publicly stated that if the measure is approved, they plan to challenge the legality of SB 293 to restore the original intent of the ballot measure. In the event that Prop. 120 is adopted and SB 293 is struck down, Coloradans would end up with a much larger tax cut, even though ballot measure explanations on which many voters rely assume SB 293 will remain the law.

Instead of further reducing rates in an arbitrary and non-neutral way, Coloradans should instead prioritize narrowing the gap between residential and nonresidential rates in a structurally sound and fiscally sustainable manner.

Finally, under current law, any surplus tax receipts above the TABOR limit are first supposed to be allocated to localities to offset homestead exemptions before any additional surplus revenue is refunded through other mechanisms, but legislators have sometimes swept that money for other purposes. The ballot measure replaces the use of the first $25 million for that purpose with an authorization to go $25 million above TABOR but only for purposes of funding homestead exemptions. This is functionally identical, except that it restricts lawmakers’ ability to redirect that portion of revenue above the TABOR cap.

Colorado voters will also have to decide on Proposition 119. If voters approve, this measure will create an out-of-school program, the Learning Enrichment and Academic Progress Program (LEAP). To partially fund the program, the state’s tax on retail sales of cannabis would increase from 15 percent to 20 percent over three years. An additional $20 million will be allocated from the state’s general fund.

While the actual ballot question text asks voters to decide on a 5 percent increase in retail taxes on cannabis (from the current 15 percent), the legislative text implements a 5 percentage point increase (which would bring the rate to 20 percent, not 15.75 percent). According to the ballot question itself, the proposed increase is expected to raise taxes by $137.6 million annually, but the fiscal analysis in the state’s Blue Book estimates a short-term impact of $37 million in this fiscal year and $87 million in FY 2023. Since the increase would be approved by the voters, the increased tax burden is exempt from the state’s TABOR spending limit.

Relying on revenue from cannabis sales to bolster spending on education is inadvisable. Narrow excise taxes are unstable sources of revenue over time, and long-term government programs should avoid dependence on the behavior of a modest subset of consumers. In 2019, Colorado voters approved Proposition DD to legalize and tax sports betting to fund water projects. The estimates then were that sports betting would raise $16 million a year. The state is on track to collect less than $10 million this calendar year.

Excise taxes should generally only be levied to internalize externalities or to establish user fee systems. Moreover, Colorado’s tax design is tied to the price of the products, so in the event of a price drop, revenue and education funding would drop too. Such an event would not be unprecedented: from 2014 to 2019, the weighted average price of a gram of cannabis flower declined from $10.96 to $4.53, an average 16.0 percent year-over-year decrease.

Rather than increasing existing rates to fund the LEAP program, the state should consider re-designing cannabis taxes. Prices share no association with the negative externalities (harm) associated with consumption. Rather than levying the tax on price, taxes on cannabis should use a specific tax base: weight and potency.

As a record 8.7% Social Security cost-of-living increase starts in 2023, here’s what beneficiaries should look for in annual statements
CFTC piles on with new charges against Bankman-Fried, FTX and Alameda
United Airlines is buying at least 100 Boeing Dreamliners to replace aging wide-body jets
Santa Claus rallies are a ‘meaningful’ trend, says financial advisor: What one could mean for investors this year
‘It could be a blessing and a curse.’ Here are 3 unexpected financial pitfalls unmarried couples need to know