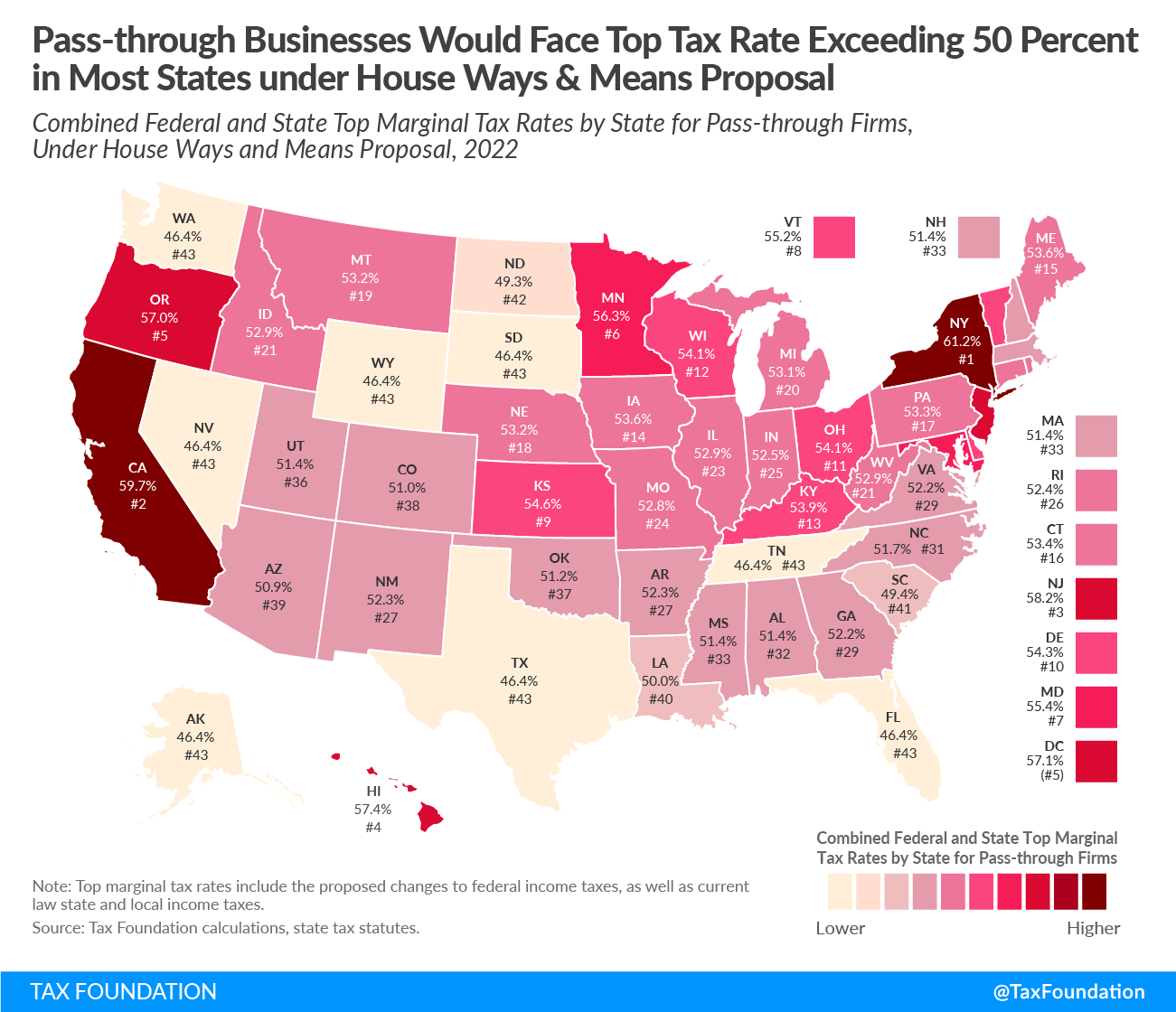 Under the House Democrats’ reconciliation plan, the top tax rate on pass-through business income would exceed 50 percent in most states.

Pass-through businesses, such as sole proprietorships, S corporations, and partnerships, make up a majority of businesses and majority of private sector employment in the United States. The owners of these firms pay individual income tax on income derived from these businesses. The marginal tax rates vary for pass-through firms depending on the state where they operate, as states tax individual income differently.

The House Democrats reconciliation plan would raise the top marginal tax rate on ordinary income from 37 percent to 39.6 percent. Additionally, high-income taxpayers would face a 3 percent surcharge on their modified adjusted gross income (adjusted gross income minus any investment interest expense) in excess of $5 million.

The plan would make additional adjustments to business taxation. Currently, qualifying pass-through firms may use Section 199A, commonly known as the pass-through deduction, to deduct 20 percent of their qualified business income from federal income tax. However, the pass-through deduction is subject to limitations for firms earning above certain income limits that operate in a “specified service trade or business” (SSTB) and other guardrails that limit the size of the deduction. The plan would further limit the deduction by setting the maximum allowable deduction to $500,000 for joint filers and $400,000 for single filers.

Finally, the plan would amend the tax base of net investment income tax (NIIT) to include income derived from the “active” part of a business, for joint filers with more than $500,000 in taxable income and single filers with more than $400,000 in taxable income. The NIIT currently applies a 3.8 percent to investment, or “passive,” income such as capital gains, dividends, and interest income. The combination of these four tax increases would result in a top federal tax rate on pass-through business income of 46.4 percent (which is also the top federal tax rate on ordinary income under the proposal).

Top marginal tax rates faced by pass-through firms after the changes would vary by state—ranging from 46.4 percent in states with no state and local income tax, like Wyoming and Florida, to 61.2 percent in New York. These combined rates include federal, state, and local income taxes in addition to payroll tax. Under this reconciliation plan, 41 states would see their top marginal income tax rate exceed 50 percent.

Raising the top marginal tax rate on pass-through business income reduces the after-tax return on investment for those firms, reducing incentives to invest and hire.

It may be claimed that the proposed tax increases only impact a small percent of firms, but economically it is more important to consider the share of business income that is affected. Our estimates indicate that more than half of pass-through business income would face a tax increase under these proposals.

As pass-through firms constitute a large share of employment and economic activity, many states would be impacted significantly by the increases in business taxation under the House Democrats reconciliation plan.  Given that many states already impose high tax rates on business income, policymakers should keep in mind the combined tax burden levied on these businesses when considering changes to federal tax policy.

Used car prices are down 3.3% from a year ago — but still ‘grossly inflated,’ auto expert says. Here’s where to find deals
Walmart-backed fintech startup plans to launch its own buy now, pay later loans
Billionaire investor Charlie Munger: ‘The world is not driven by greed, it’s driven by envy’
Student loan forgiveness could fall through for 30 million borrowers. If it does, consider these 4 relief options
Americans are flocking to wildfire country